Dawn Of The Ultimate Automation By Buddy

As the technology has advanced rapidly, the world is on the brink of the total conversion from the manual labor to the automated machine complex with high-end sophisticated tech and so forth. The major business player such as Google, Amazon and so forth has employed the automation to run almost every sectors of their workplace, and therefore they have received a huge boon from the advancement of the tech in the world. The world of automation is very promising as it will make a new window for every business and workplace and make human work easier as the automation can solve so many problems that human face nowadays. The world of automation will generate a great possibility for the other room human to explore, as less work needs to be done by human and converted to the machinery complex. That is very promising and thus need to be executed properly in order to make the human life better and easier.

The history of automation itself is a long one, although the automation in the past may not refer to the high-end machine just like today we see. It is started with very simple and fragile, but bulky machines which are very inefficient and do very little things to be considered as helpful. As the time goes, more and more sectors have been automated and therefore the automation has covered a large number of the human spectrum, from a simple culinary business to the complex mega business in the earth. The automation has indeed become a great help for humanity as It eliminates the mistakes which are conducted by human, and it makes the job easier and shorter as the machine can work much better, faster and surgical precision accuracy with a very high reliability. Those reasons are the reasons why people have developed and searched for the automation for their industry and business as it cut cost and increase effectivity. 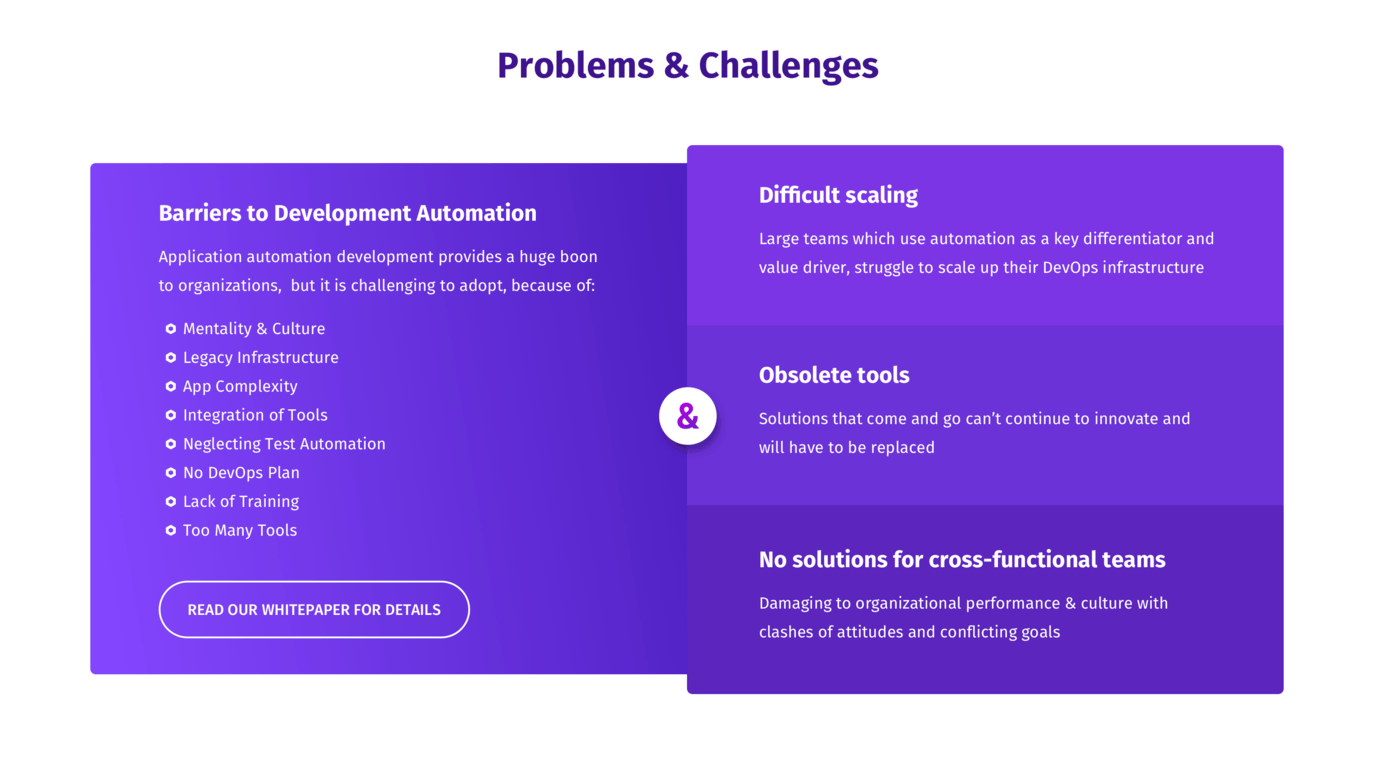 But still, the automation that now exists in the world is far from perfect. There are a lot of problems that are now haunting the very core of the automation itself which are preventing the humans to apply it more,  such as:

The automation can be called as AI or artificial intelligence is something new for the world to see. The AI itself is divided into two types, which are the strong and the weak AI. The strong AI is the self-sufficient AI which is very sophisticated and can do a lot of things so that they are very reliable in human business and industry, meanwhile, the weak AI is just the opposite of the strong one. The strong AI is actually very limited in use since the tech that exists is not yet supported the strong AI to be manufactured en masse. But the weak AI is also not pretty much useless, even though they can do a very little thing compared to the strong one. The weak AI that exists nowadays in a majority of the business is pretty much ineffective and therefore need to be upgraded and integrated to a stronger mainframe.

The automation is without a doubt, very expensive. It is very expensive to the point it is no longer feasible for the user or the business owner to own them, and it would be cheaper to hire a bunch of workmen to do the job. The tech is rather new for the automation and therefore the application and the cost could be problematic. The AI that is implemented is also very limited in capacity, and therefore it is very likely to be replaced by humans which are easier to be commanded and trained. The cost of implementation of the automation is staggering, especially the strong AI which will benefit greatly for the corporations, and therefore many users of the business owner still stick to the weaker AI for the sake of their operations.

It is also not very easy to adapt to and adopt the mechanization and automation nowadays. It has also become a very sensitive issue that automation someday will rule out the entire business as the human will be replaced entirely by machines complex. The automation is very complicated too and therefore it needs a very skilled engineer and technician to implement the AI that is going to be adopted by the corporations. After the adoption, the user also must be trained so that they can use the AI more efficiently and making them very productive in their work. The training will be costly and takes time and therefore many corporations are not gambling their cash away for the adoption of the automation. It is better for them to hire more people, as they can do more job, and increasing the effectivity of the corporations, rather than risking the entire operation for a simple and weak AI, as that is their paradigm in deploying the AI.

Not all AI or the automation can be quite reliable. There is some automation that is not so practical since their capacity is very limited and therefore hindering the whole operations. There is also the issue of security, as the AI and the automation are very prone to hacking and cracking, and thus making them very vulnerable to such an attack. Employing an additional barrier of protection will increase the deployment of an AI and therefore will be very heavy and difficult for the newly emerging business. The automation can also be broken down and therefore the maintenance needs to be very intense and careful since they cost too much if they are permanently broken.

The automation is indeed a very bright promise, and therefore need to be taken seriously. The first thing to be added is to ensure that all those problems go away and therefore creating a solid and strong bridge between the automation prospects and the user that is going to adopt it.

For further information concerning the AI and the automation world, you may refer to the web pages below.

Improving Automation With The Buddy To Enhance Efficiency

The world of blockchain has resolved so many issues that have already exist in the world for a long period of time. The issue of effectiveness and efficiency has been improved way better for the application of the automation that has emerged today in the world. The blockchain could be said as the cradle of the automation since it has been absorbed by so many people to elevate the living condition, making the world easier and faster as it grows, and giving so many windows of opportunity that is previously impossible to be accessed without it. The blockchain is also giving birth to many disruption-oriented forms of business, which are directed to make the living condition better, cutting cost, or simply introducing a fresh and new alternative for the world to see. There are so many things that have occurred due to the improvement of the blockchain ecosystem, and one of them is the introduction of the buddy, the platform which brings the world of automation closer.

As we have stated above, the world of automation might be not very friendly since they are not for the newcomers as they are very costly and need a very skilled technician and engineer as they are very complicated. The complexity of the automation world can be reduced by the application of this platform since this platform will bridge a newcomer to the world of automation. This platform provides so many opportunities and forms of automation, from the simplest to the most complicated and sophisticated tech of automation that will suit your business. There is a lot of business can deploy the automation and definitely will receive a great boon of it, such as the delivery business, culinary, manufacture, and so forth.

There are so many reasons why buddy is one of the best platforms that offer the automaton, and there are several reasons why we should adopt the buddy platform for our businesses.

For the app developer, the automation GRID could be said as the core of their work. The GRID is actually a series of programming that will exist in the app and therefore requires the automation to fully finished that. The buddy platform will provide the GRID for the developer which are very easy to use and could work faster and better compared to the other GRID or the other automation programs. The application of the GRID  itself is very easy and don’t consume so much time, and reversely, this could save hundreds of hours as it will be very efficient in use, and user-friendly as well. The GRID is also very powerful and can do a lot of things and make it very flexible for everyone to use it.

The blockchain is a never-ending growing market nowadays, and therefore should be supported by creating a faster and stronger app and automation to rely on. The buddy has also supported the blockchain ops as it will provide the blockchain developer to make it easier for them to develop their ecosystem. This is due to the high end and sophisticated tech that has been deployed by the buddy team to ensure the efficiency of their automation. The automation and the blockchain could bode very well and therefore make the developer process shorter and better which will ultimately reduce cost as the time goes.

In the blockchain ecosystem, the partnership is one of the most important things for them to have. And just so happens, the buddy platform has secured themselves the most powerful business partners that have been proved very efficient in the market such as Google, Amazon, Microsoft and etc. those partners have been using the products of the buddy, and buddy are also receiving support from those corps, and making them stronger and market proof.

Not only for the app and blockchain developer, the buddy platform is also integrated to the day to day life of the end user. This will make the end user receives the benefit of the automation that has been offered by the platform itself. It will make life so much easier and better to deploy the platform and thus making it very beneficial for the user.

For further information concerning the use of the platform, you may refer to the web pages below.

The Token Usage and Token Sale 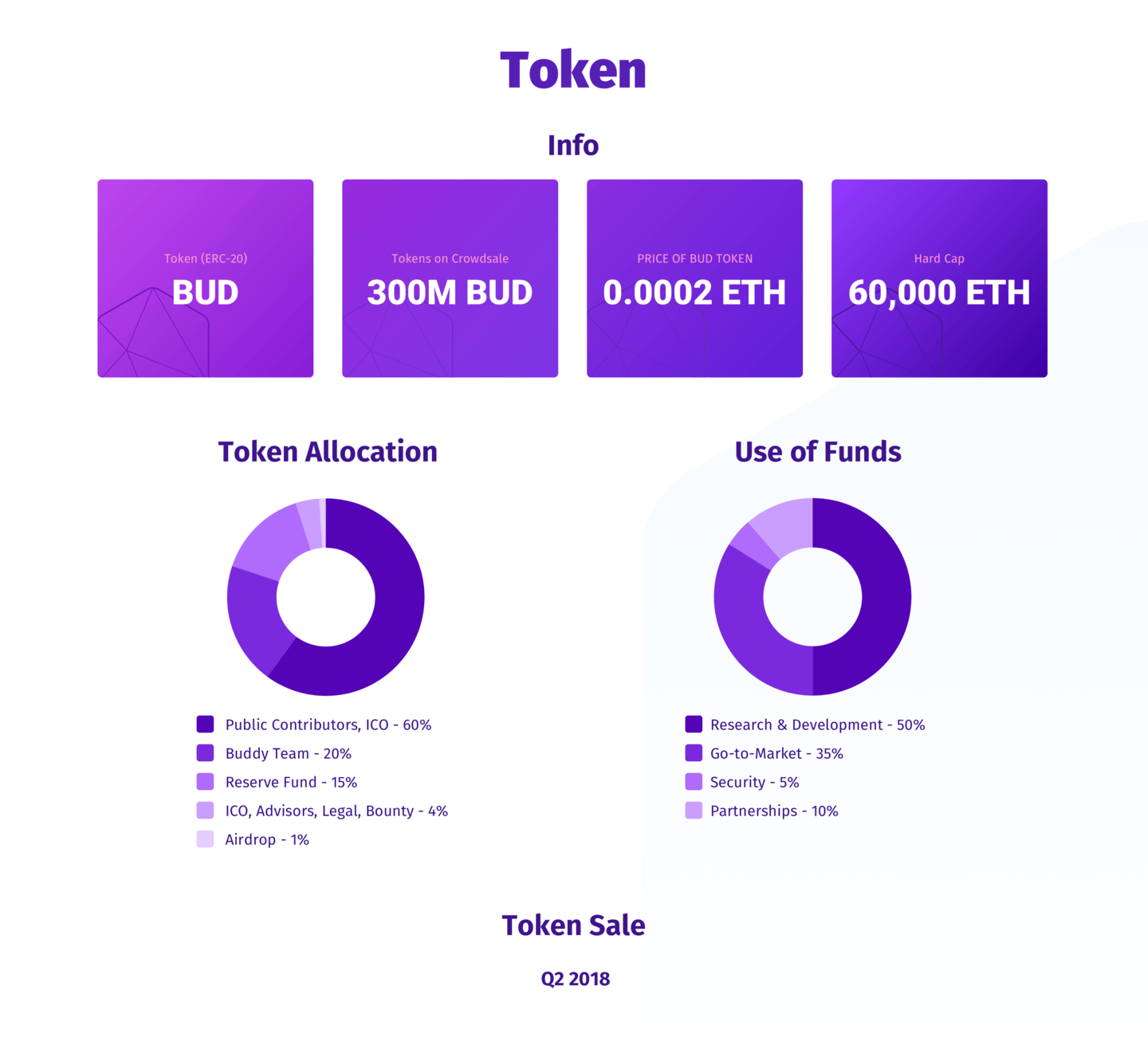 Just like the other blockchain platform that employs the token to run, this platform has also their own token. the token will be called the BUD token, and it will primarily be used to enhance the user experience inside the platform, as it will give the user to some areas and thus gaining more benefit for them. the token can be acquired in the sale that is divided into three parts.

The token cap for the sale is about 60 thousand ETH or equivalent to 470M bud token. those tokens are a portion of the maximum token that will be generated, which are about 675 million bud token. As for the result of the purchase, the fund will be generated to several posts, such as the research and development post, the developer team and so forth. Using buddy will definitely benefit you, and therefore you should use it for the good of your business.

For further of information, you can access the web pages below.