KubitX And The New Platform For Token Exchange

A token exchange is the most important thing for the cryptocurrency services and therefore the exchange need to be optimized in such a way that all customers can employ such services throughout the world. The cryptocurrency or the token has become new money that circulates in the global economy, along with the other fiat currencies. The token and the platform, still need to be improved though, since they carry so many issues which hamper the utility and usage of the token itself. The world of cryptocurrency is also just recently emerged, and therefore a majority of the people purchase the token without knowing the further details concerning the token itself, and therefore making the additional purchase and then resulting in the loss of money. This is an issue which needs to be taken down, and therefore all platform should strive hard to tackle this lack of education and information issue toward the general population of the world.

Secondly, a majority of the platform suffers the issue of practicability. The token, as we know, it is only useful within the platform to conduct several purchases or transaction, and they cannot be used just outside the platform. This makes the token very useless in the term of practicability since the token cannot be utilized to purchase the daily needs of the people. Even though there are also several platforms that attempt to solve those issues, they work uncoordinated and resulted in the abundance of the platform which intersects one after another, and therefore rendering them redundant and not so practical in the end. The coordination needs to be conducted per platform so that they can create a better ecosystem which is practical for the people to use.

As for the rest of the issues concerning the token and their usage, here are several of them.

The cryptocurrency and the respective platform are and innovation to combat the old and aging business environment which are very centralized and benefit the few. But unfortunately, the scope of the platform is insufficient to the western countries such as western Europe and USA, and a little part of Asia. This means that the solution that is offered by the platform are not embracing the broad swath of the world and thus making the platform very exclusive and hard to be used in the majority of the countries. There are several issues for this parts, such as the tech barriers, the administrative and legal barriers, and so forth. The platform and the token need to be adopted by a majority of the countries so that they can feel the benefit of joining any particular ecosystem.

There is the infinite amount of token that revolves in the world, and each of the tokens has their value and type as well. That is a good thing since it gives the market a boost they need, and therefore encouraging the society to be integrated into the ecosystem of the platform. But due to the massive number of token that exists, the need to exchange the token become very important, but unfortunately there are not enough platform that provides such services. This leads to the tedious process of exchange, especially the token to the fiat currencies. The exchange also will require the user to pay a specific fee for the platform to gain profit and thus developing the platform. But that makes the user lost their money and therefore making the exchange impractical.

The security of the platform is also at risk, since several security issues need to be taken down by the platform, and one of them is the hacker. As we already know that the tech that brings the platform, which is the blockchain is somewhat new and still need a lot of work to improve the system. The hacker usually exploits the gap in the security to breach the protection layer and thus stealing the money. The report estimates that the hacker attack alone has cost the entire blockchain platform up to billions of dollars. This will ultimately shut the whole ecosystem if the issues are left untreated. The platform needs to have a coordinated work to increase the protection and the security of the blockchain and the smart ledger so that the hacker could no longer attack them.

Since the crypto-based business is very new in the global market, many people don’t understand how they work, and how do you even make the profit by joining one. This makes the people purchase the tokens simply it is the trend that currently goes viral, such as the bitcoin boom in recent years. We do know that the token is not a form of investment since there is no guarantee that the value of the token will be forever increased. That is not happening since the value of the token is fluctuating and thus making the newbie investor scratching their head. It is better for any platform, Or the token exchange platform has their supportive customer care which will tend to their customer and gives them the insight that they need before they purchase the token.

There are several reasons why people are purchasing the token, and one of them is to join the ecosystem of a platform, and the other to make the investment using the token. The next need to be educated that the token can increase their worth in the global market, but it can decrease since it is not a very solid form of investment such as the gold bar, some lands, or properties. Those are the issues that are plaguing the crypto world and need to be handled seriously. Otherwise the market and business of the cryptocurrency will start crumbling fast.

For further information regarding the crypto related issue, you can refer to the webpage here.

Kubit And It Role In Rejuvenating The Crypto World

As we already know, the world of cryptocurrency will always relate to the platform that issues the token or the cryptocurrency itself. The platform is the primary concern when it comes to the token since the platform will determine what kind of token that they will use, and how they will use the token. There are so many platforms that issue their token, and they come with a very different business concept which is very interesting. Some of the platforms run in the services, while the other works in the different lifestyle which are very important and fresh for the market. But one which makes them the same is, that they run to disrupt the world of the centralized and conventional business so that they can give a new alternative for the business.

It is also what happens with kubitX, which is also one of the leading platforms to disrupt the natural exchange platform ecosystem that is already existed today. It gives the alternative for the people so that they will have numerous possibilities and comparison when it comes to the token exchange platform. Here are several unique features of kubitX which could be used by the user for their gain.

The tactics of the platform are, to widespread the services as far as they can, so that more and more people adopt the platform. This is because the kubitX is not just an ordinary token exchange platform, just like any other else. KubitX will be able to store your money, be it in the form of a token and the fiat currencies so that you can have it as a wallet for your digital money. This is an essential service to simplify the methods of the transaction, especially in the region where the service of the bank is utterly lacking. The platform can serve as the ATM that can store your money, and you can use it without even having to have the physical paper money, just like the debt in the ATM.

As you have so many tokens that could be used for the daily purchase, you don’t want to lose it. The wallet or the place where you will store the token will be protected by the most sophisticated and advanced tech so that you will have a very secure and protected form of a wallet, and no hacker or cracker can do anything to your wallet.  The wallet will also have the multi-steps verification process so that only the user could access and exchange the token itself.

There is nothing more satisfying than having the most efficient token platform at your disposal, and that is what kubitX is. As we have mentioned above, Kubitz will strive to implement the most advanced banking system in the remotest area of the world, so that they can have the banking services which could be used for a various occasion such as paying remittances,  merchants, funds transfer, bill payment and so forth. Those services are very crucial for the people since it will ease their life, and make them very comfortable in doing some financial transaction. The platform will also come in the mobile app to monitor your token and do all sort of transaction and exchange, and make this platform very versatile and practical.

For further information concerning the usage of the platform, you can check these web pages.

The ICO And The Allocation Of Funds 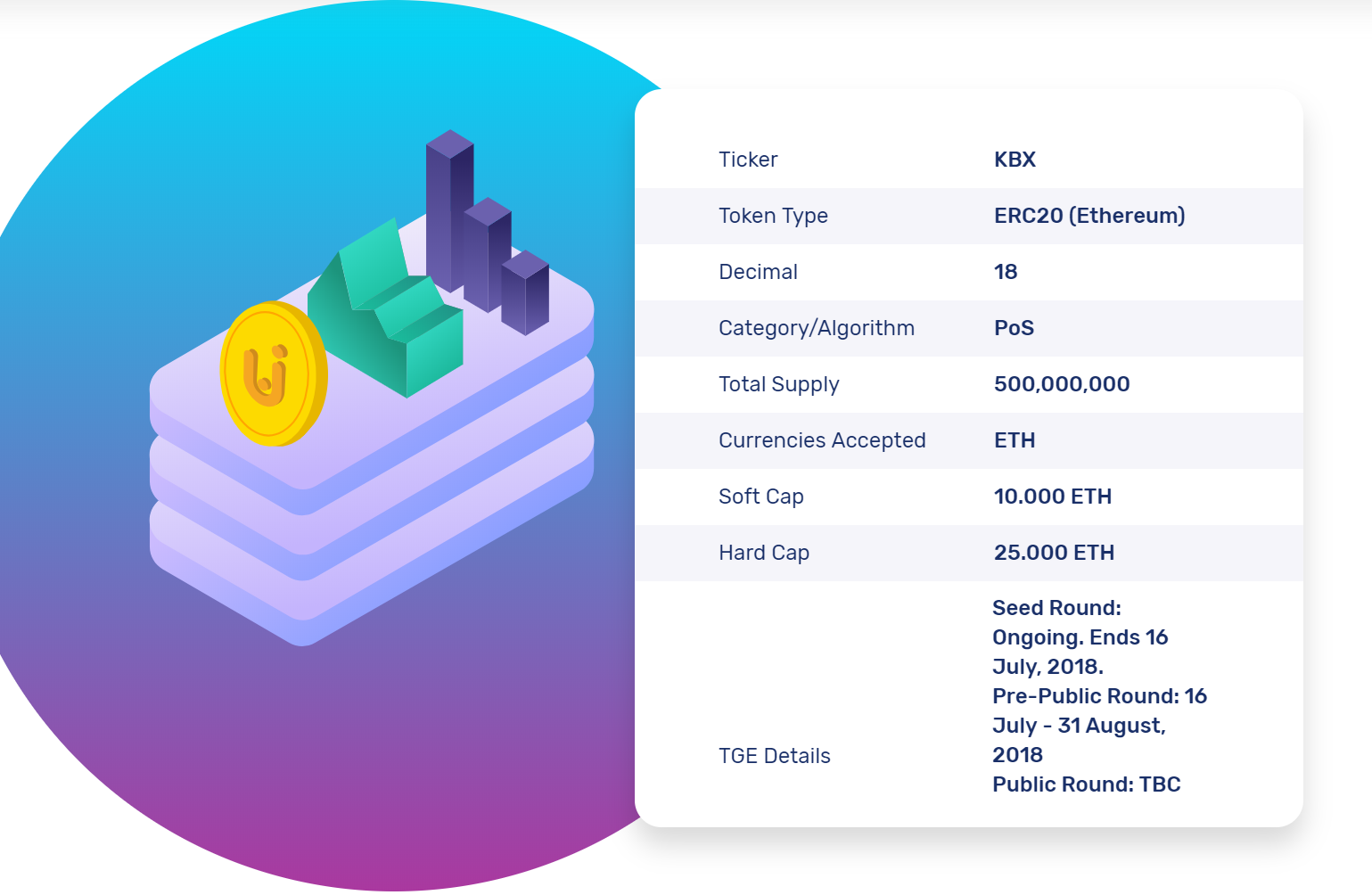 The platform does employ the token as it is the part of the cryptocurrency and the blockchain ecosystem. The token is just like any ordinary token, which is called the kubitX token and have the worth around 0.0001112 ETH per token. The token is mainly used within the ecosystem to do some transaction that is imperative. The first is to pay the fees of the token, which is required for all the users to do per transaction. The fees work just like the taxes that will automatically be added to the token worth per transaction, and therefore you can pay such fees by using any token you have. But when you use the kubitX token to pay such fees, therefore you will be able to reduce the value of the fee, and you will have a more significant amount of money in your transaction. The fee reduction using the token will be up to 20% per transaction.

The only way to get the token is to join the sale. There are three types of the sale, which are the seed or the private sale. This sale is already over, and the platform is now moving on to the second type of the sale which is the pre-sale. The pre-sale yields the bonus for up to 20% and will have the minimum purchase of 25 ETH. Currently, the platform is running the pre-sale, and the sale will end on 31st August 2018. And as for the third type of the sale, which is the main sale, it has not yet announced in their websites, but there is a good chance that the sale will occur just after the pre-sale, which is somewhere in September to November.

And as the caps, there is no cap for each since the platform employs the general caps for both sales. The soft cap will be around 10 thousand ETH and the hard cap will be 25 thousand ETH. The token supply will be around 500 million tokens, which half of them, or 250 million will be used In these sales, and like the rest of them will be appropriately distributed to several parties such as the founder team, the advisors, legal and reserves.

For further information concerning the token sale, you can visit one of the web pages here.