Purchasing A House Easier And Faster By Viva Network

House is an ever-increasing need of humanity since all humans need shelter to house their family and fulfill the needs of them such as resting, relaxing, and so forth. But the housing industry is threatened by the skyrocketing prices since more and more people are being born and fewer lands are available for the housing. This makes the house has a very high price and requires a huge amount of money to even pay the Down Payment. This is indeed very frustrating to all middle classman people since they don’t have that money to purchase the house, and in the end, they have no house and forced to live with their relatives for the rest of their lives. There is actually one practical solution to this circle, which is having a loan to purchase a house but to are possess the threat that could ruin someone financially and lead to a disaster in the market if the loan is not done properly.

We are all too familiar with the failure of the banking industry in the mortgage crisis of 2008. The problem is actually very simple since it just covers up the failure of the people to pay their debts to the bank at that time, leading to a very serious economic disaster that almost ruins America and Europe back in that time. Even though having a loan could become a huge help in having a house, the centralized system with a huge interest that imposed by the banks are making the people very difficult to pay their loans to the banks. This is indeed very counterproductive since the banks live on the loan, and the people simply can’t pay the loan since it has a huge interest with years to complete the payment period. This is the major issue why people are becoming more and harder to obtain their house.

In the world alone, the housing industry, along with the property industry has made trillions of dollar per year, and that will keep going on since the value of a house will steadily increase and more and more people are less able to purchase a house. Housing is usually divided by its type, and the bigger the type, and more expensive than the house will be. But the problem here is, even we are about to purchase the smallest type of a house, the amount of money that is required to purchase a house is still astronomical and making it more inconceivable by all the people that want to have a house. Even though the government are already providing the solution such providing the house with the zero payment system, reducing the value of a house, but that is not tacking down the most basic issue that is now happening In the world, which is the inability of a person to purchase a house due to its astronomical price. This circle needs to be broken down as soon as possible since more and more people are greatly in need of a house.

For further information you can visit one of the links below:

The risks of the platforms and platform mechanism

There are a lot of reasons why this kind of mechanism will be favored by the people, and thus making this platform healthier and more reliable, which is:

First is, all the procedures mostly conducted online, and it means that you don’t have to follow a series of very long and complex procedures that are usually imposed by the banks or the third party which is very inconvenient and tiring. The documentation that is required for the platform is online which mean the applicant will just need to upload their document in an instant without even be needing to go to certain places.

And as for the security issue, the team has been equipped with the most talented and experienced group of assessor that is capable of determining someone’s ability in real time. They are able to determine and foresee the risk that exists in the certain people, and as well as distinguishing the real documents and the fake one. This is crucial since a lot of banking institutions are failing due to the fact that they are giving the money to the wrong person who is not able to pay for the money they owed to the banks. The team will also provide the advice for the applicant on how to pay and manage their money to reduce the risk of the applicant not being able to pay for their debt.

The third is the funding mechanism. The funding mechanism that is imposed by the platform here is crowdfunding, meaning that there will be a lot of people are investing in this platform by purchasing the token of the platform and thus the money will be used to fund for the applicants and the mortgage. The applicant then will need to pay for a certain amount of money, and then the money will enter the crowdfunding market and becomes more money to fund even more applicant and so forth. This mechanism means that the platform will lose nothing and benefit nothing unlike the banking mortgage system and so on. The platform Is also not giving the extreme amount of interest since the money is sourced on crowdfunding, not the typical money that is provided by the banks.

The crowd funding will be translated by the platform namely the fractionalized mortgage shares or FMS. This FMS will become the amount of money that is needed in order for someone to purchase a house. usually, there will be 100.000 FMS per house, and then the crowd fills fund those FMS per month. There are a lot of reasons why FMS is very prospective for all the people. First of all, it is investment mechanism, meaning that people will receive a certain amount of money as they invest in the FMS. but FMS itself is not the token of the platform since it just the integrated investment mechanism that will be enjoyed by the people who are willing to pay for the FMS and thus crowdfunding the platform. One FMS at a time will be equivalent to 10 dollars per month, so logically, the more FMS that one person has, the more investment they will receive per month. But you should notice that the amount of the investment is not fixated.

There are indeed several risks at play when it comes to the investment, such as:

The first is the inflation risk, as it plaguing all kind of investment in the world. The more in the inflation is, the lower the value of your investment, and vice versa. But naturally, if the inflation rises, then it is not just your investment is at risk, but a whole country economic too. Meaning that the government will try to hold and reduce the amount of inflation in that country to stabilize and strengthen the country economy. The second risk will be the market risk, where it is directly linked to the housing market. To put it simply, the more house sold in the housing market, the more money you can get per FMS since FMS is generated by the house that is sold to the applicants. Similarly that if the less house is sold, then the less amount of investment money can be made.

Interest is also the risk that really needed to be accounted for. Simply, as the interest climbed up due to the global economy, the investment rate is dropping since the interest will take up several amounts of money. but up to this day, there is no sign of the interest rate being high drama in the short few days due to the market optimism. The interest rate is also steadily declining since more and more business field are opening up and the market is going at a high speed to recover and regenerate money.

For any further related information, you can visit one of the links below

The sale and token generation event 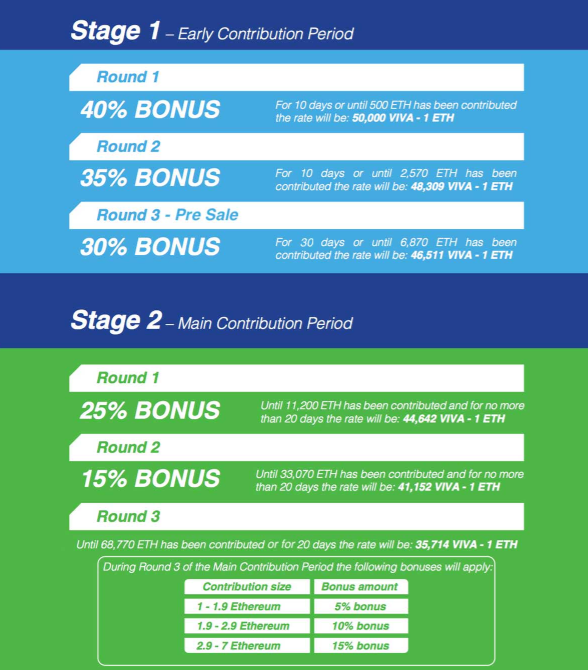 Just like any other blockchain platform, this platform also has the token that could be used in various ways. The token is called the viva token, or the token for future statements. The token as we already stated before could be used for many things, but primarily is to use the facility of the platform such proposing the loan, paying the loan and so forth. the token is the ultimate form of payment where no other methods of payment are received by the platform. To get the token, the people are required to join the series of sales that is being conducted by the platform. Mainly the platform is holding two kinds of sale, which are the first stage which consisted of around 3 rounds, and the main sales which also have 3 rounds. Here is the more detailed information concerning the rounds of sales.

The first stage of sale is the pre-sale, or as any other blockchain refers to. This is where you can get all sorts of bonuses that is very profitable for you. There are three rounds of the pre-sales, as the more rounds, the lesser bonus you can obtain. The first round has 40% purchase bonus, and the last round has around 30% bonus per transaction. The interval between the rounds is about 10 days, so you need to make sure what kind of rounds that you are following. As we speak, the first stage of sale is about to come to an end, since the first stage of the sale will end at 1st of July.

The main sale or the main contribution period is the where the majority of the token will be distributed. There are 4 billion of the token that is available for this platform, where 75% of them or about 3 billion of them are the hard caps of the main sale. The period of the sale is about 60 days and Main Sale Starts July 20th. The main sales also have the 3 rounds with their own bonus, ranging from 25% to regular sales with no bonus. As for the price, the price of the token depends on what kind of sales and how many bonuses you receive from the platform. The price is ranging from 50 thousand tokens per ETH to around 35 thousand tokens per ETH. And as the currency value, the token is worth roughly around 0.009 dollars per token.

The token usage is primarily for the main transaction of whatever the transaction that occurred within the system, be it the payment of the loan, the proposals, and so forth. and as for the exchange, unfortunately, there is no information concerning the exchange that could be done using the VIVA token, but the website does promise there will be several practical usages of the token in the near future.

For any further information concerning the sales you can visit one of the pages below: